Despite the very short daylight hours and the often slightly inclement weather, winter birding on North Ronaldsay can be very productive and enjoyable with huge numbers of Gulls and waders feeding on the deep banks of washed up seaweed around the coast; these flocks often contain visitors from further north with Iceland Gulls and Glaucous Gulls regular in amongst the big numbers of Herring, Common and Great Black-backed Gulls.   On the shore, Turnstone, Purple Sandpipers and Sanderling are the most numerous waders at this time while in the fields, flocks of Golden Plover, Lapwings and Snipe feed, often flushed by a Hen Harrier, Peregrine or Merlin zooming around causing panic in the foraging Gulls and waders. 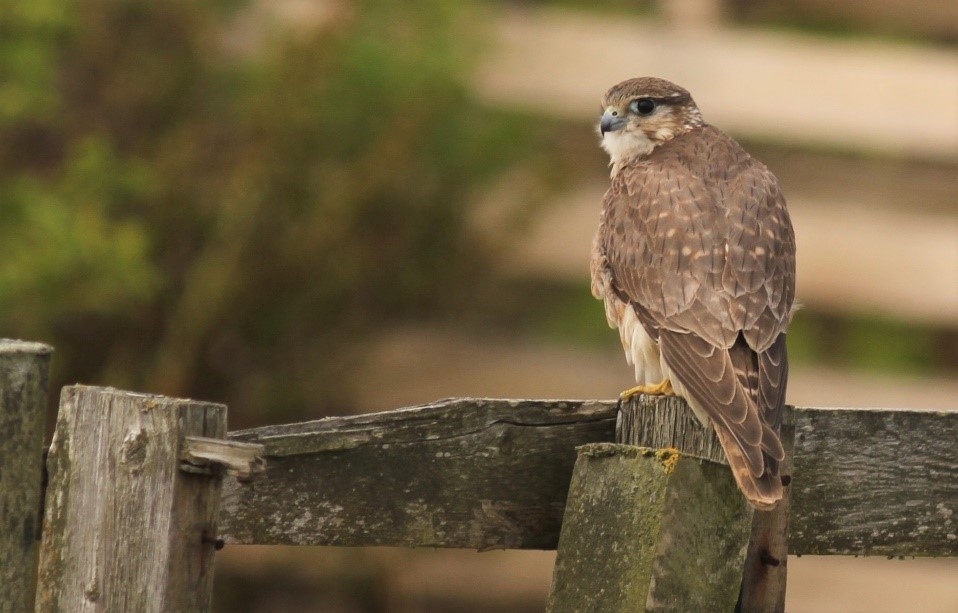 Offshore at this time are good flocks of Great-northern Divers, Red-throated Divers, Long-tailed Ducks, Red-breasted Mergansers and Auks while searching can often produce scarcer species such as Black-throated Diver or Slavonian Grebe.   The wildfowl theme continues across the island with the many lochs holding interesting ducks, geese and swans with Whooper Swan, Pintail, Shoveler, Wigeon, Gadwall and Teal all present in good numbers while patient scanning through the rafting ducks regularly produce exciting species such as Smew, Green-winged Teal, Scaup or American Wigeon.

It’s generally quiet at this time of year for Passerines but flocks of Snow Buntings twinkle across the fields and shore, Rock Pipits forage on the beaches, Hooded Crows and Ravens patrol the skies and big, swirling mumurations of Starlings try to avoid the waves as they also feed on the seaweed.   However, if winter hasn’t been too cruel then a range of migrants which arrived the previous autumn can decide to brave the conditions and try to overwinter with Redwings, Fieldfares, Robins and Twite choosing to remain.

Spring up here starts subtly with many species that are resident in the rest of UK only venturing this far north when the weather marginally starts to improve; the first signs of the changing seasons are often the arrival of Pied Wagtails, Linnets, Meadow Pipits and Chaffinches towards the end of February and into March.    As the spring moves on through March and into April the passerine migrants start to increase with species such as Grey Wagtail, Goldcrest, Mistle Thrush, Chiffchaff, Black Redstart, Stonechat, Brambling, Siskin and Lapland Buntings starting to appear along with more Gulls, ducks and waders, either arriving to breed or using us a stepping stone for their onward migrations.

Birders thoughts naturally begin to turn towards rarities at this time of year and the further we get into April and May, North Ronaldsay more and more frequently delivers, with the outstanding bird of the last few years being the first British record of Red-winged Blackbird at the end of April 2017 proving that anything is possible from here on!   Other scarcities at this time of year are more predictable with regular White-billed Divers appearing at the end of April and as May arrives, classic Northern Isles birds which are much rarer throughout the rest of the UK include Bluethroat, Red-backed Shrike, Common Rosefinch, Marsh Warbler, Wryneck and Red-breasted Flycatcher.

Because of North Ronaldsay’s position the main spring passage period occurs slightly later than the rest of the UK so mid-May until the first week of June is largely considered to be the best time for some spring birding; it is now that we get most of our Cuckoos, Redstarts, Whinchats, Spotted Flycatchers, Pied Flycatchers, Tree Pipits and the full range of British breeding Warblers as well as scarcer species including Nightjar, Golden Oriole, Turtle Dove, Dotterel and Honey Buzzard. 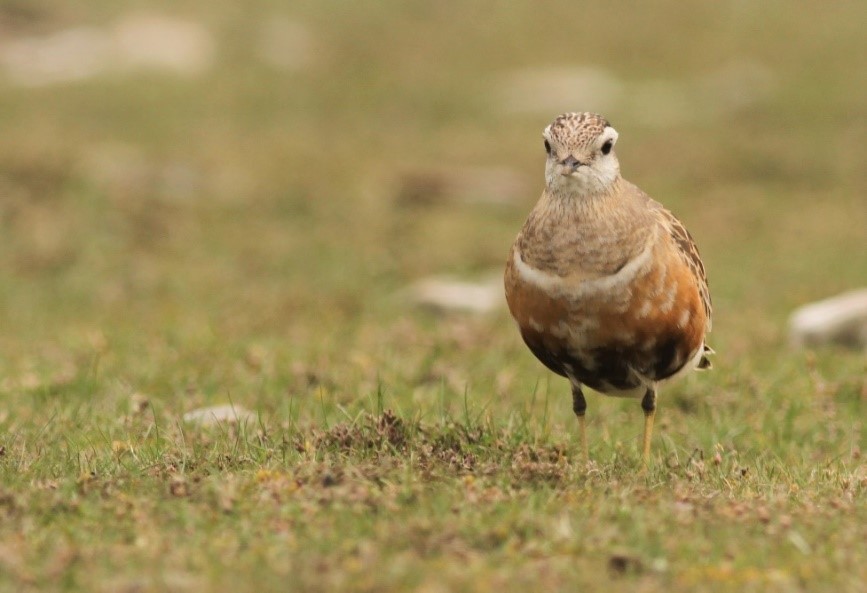 This period is also the best for big numbers of waders – now in their breeding finery with hundreds of Knot, Turnstone, Sanderling, Purple Sandpipers and Dunlin thronging on the piles of seaweed and a range of species more at home on fresh water including Greenshank, Green Sandpiper, Common Sandpiper, Wood Sandpiper, Curlew Sandpiper and Little Stint, all on their way to breed above the Arctic circle.

As the spring migrants begin to fade away we now concentrate of the breeding birds of the island with the fields full of nesting waders as Oystercatchers, Curlew, Redshank, Lapwing and Snipe all compete to see who can shout at you the loudest if you get too close, hundreds of Fulmars on nests around the base of the sheep dyke, high numbers of Black Guillemots filling the air with their displaying, whistling calls as they jostle for position on the boulder beaches and huge, noisy Arctic Tern colonies which, have no doubt, will let you know when you are near!

The range of breeding passerines include Skylarks, Wheatears, Wrens, Blackbirds, Meadow Pipits, Pied Wagtails, Sedge Warblers, Linnets, Twite and Reed Buntings with the abandoned crofts home to Swallows and Rock Doves.   Other breeding species on the island comprise Great Skua and Arctic Skua, noisy colonies of Black-headed Gulls and Common Gulls, numerous Greylag Geese, Great Black-backed Gulls and a range of ducks on the lochs including Mallard, Teal, Shoveler and Gadwall with occasional Garganey, Wigeon and Pintail joining in.

Before you know it, return passage has started with often no gap between ornithological spring and autumn as by the end of June the first returning waders are already making their way south again after breeding attempts further north with Golden Plover, Whimbrel and Wood Sandpipers appearing in the fields and on the lochs, these first flocks often drag other, rare species of waders with them as Pacific Golden Plover, Pectoral Sandpiper and Buff-breasted Sandpiper amongst others have all popped up at this time of year. 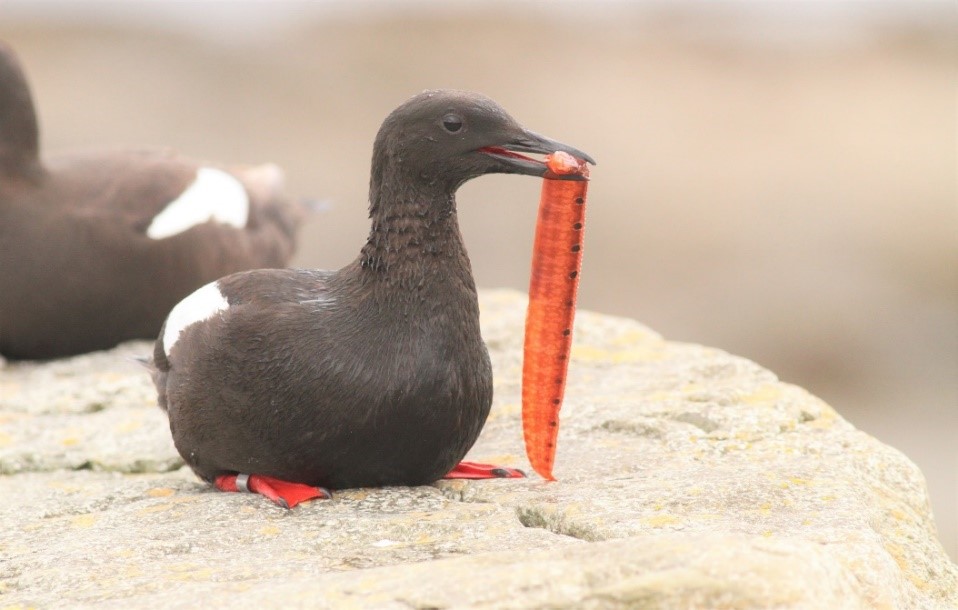 Barring the odd surprise (which happens most years!) Passerine return migration will start in August with birders praying for a big high pressure system to develop over Scandinavia and the associated easterly airflow, drifting the first migrants across the North Sea; from now on, the Northern Isles come into their own again with a range of species turning up here much more frequently than the rest of Britain as Barred Warbler, Wryneck, Icterine Warbler, Citrine Wagtail, Greenish Warbler and Booted Warbler all become firmly implanted in birders internal radar systems as they search through the often high numbers of commoner migrant birds.

Our attention also turns offshore from now with North Ronaldsay’s geographical position making it ideal for seawatching as any birds in North Sea wanting to get back to the Atlantic are naturally funnelled around the north end of the island.   In amongst the regular Manx Shearwaters, Sooty Shearwaters and Storm Petrels it is perhaps the best place in Scotland to connect with such sought after species as Great Shearwater, Cory’s Shearwater and Fea’s Petrel; with the added bonus of frequent pods of Orcas and Risso’s Dolphins how can you not gaze longingly out to sea!

As the autumn progresses the sense of excitement increases as from now on, anything is possible!   August and early September can be good but its generally considered that the last two weeks of September and the first week of October is the prime time, both for numbers and variability of migrants on the island.   The common migrants at this time are perhaps the most impressive feature of the autumn with tens of thousands of Redwings, Blackbirds, Fieldfares, Robins and Goldcrests pouring across the North Sea from Scandinavia creating a spectacular event especially when certain conditions – north-easterly wind, drizzle and the new moon prevail and they all arrive at once!

North Ronaldsay has a reputation at this time of year for turning up some incredibly rare birds with flocks of private planes turning up at the airstrip full of twitchers chasing the latest offering whether it be a Siberian Blue Robin, Yellow-browed Bunting, Siberian Thrush, Eye-browed Thrush or Black-billed Cuckoo. 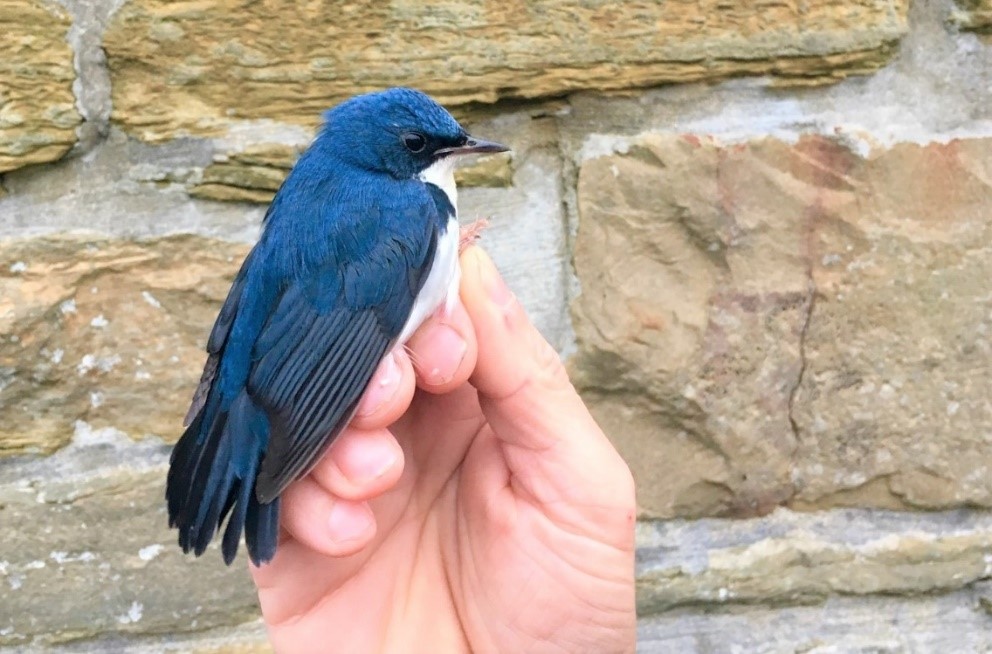 And so, we come full circle with the nights drawing in again, Little Auks beginning to appear offshore, Iceland Gulls and Glaucous Gulls venturing down from the Arctic in the increasing storm driven flocks f Gulls and waders and Snow Buntings once again flitting across the island.